The aim is to keep things as simple as possible, and to maintain alignment with the categories of our users as defined in our Choose Your Comfort Level guide for EX‑CommandStation (Conductor, Tinkerer, and Engineer).

However, there are complexities in setting up a turntable that tend to make EX‑Turntable more in the realm of the Tinkerer level user, even when using the ubiquitous ULN2003/28BYJ-48 stepper driver and motor combination that are readily available.

To make full use of EX‑Turntable, you will need a basic understanding of EX-RAIL automation, but we’ll share the details and some examples to help with this.

EX‑Turntable is in public Beta testing, and as such, we encourage regular feedback on the success or otherwise of both the software and documentation. Please reach out via any of our Contact Us methods and help us get EX‑Turntable as easy to use and reliable as possible.

For a current overview of all outstanding feature requests or enhancements and known bugs to be fixed, visit the EX‑Turntable view of the DCC-EX GitHub project.

For those who wish to help us with Beta testing, you’re encouraged to follow the testing processes outlined in the Regression Testing process, and then submit your test results using the Beta Test Results issue template.

Using other pre-defined, supported stepper drivers and motors are achievable at the Tinkerer level, but may enter into Engineer territory depending on the specific hardware.

Credit where credit is due!

AccelStepper.h credit: This project would not be effective without the excellent work by Mike McCauley on the AccelStepper.h library that enables us to have somewhat prototypical acceleration and deceleration of the turntable. A slightly modified version of this library is included with the EX‑Turntable software (sans example sketches), and more details can be found on the official AccelStepper web page. Modification comments are included within the library.

NmraDcc.h credit: Also, while not directly used in this software, Alex Shephard’s “DCCInterface_TurntableControl” was the inspiration for the initial turntable logic for another DCC driven turntable that translated into the beginnings of EX‑Turntable. You can see this code as part of the NmraDcc Arduino library.

Full step, half step, and other modes

Stepper motor drivers typically support more than one mode for driving stepper motors. This simply means that they can be turned less than one complete step, allowing more granular control of positioning, resulting in higher precision, and much smoother operation. For example, the DRV8825 can drive 1/32 of a step, talk about smooooth!

If you’re not familiar with stepper motors then you only need a very basic understanding of how they work in order to use EX‑Turntable successfully on your layout, as the concept is very simple.

A stepper motor is able to be rotated one step at a time, which translates to degrees of movement around a circle. For example, the ubiquitous 28BYJ-48 stepper motor referred to here takes 2048 steps to make a full 360 degree rotation (in full step mode). The higher the number of steps in a single rotation, the easier it will be to get perfect alignment between the turntable and your layout, and this also typically translates to smoother rotation.

You don’t actually need to know the number of steps required to make a full rotation as this is calculated by EX‑Turntable the first time it starts up and performs the calibration sequence. You will see the number displayed in the serial console as outlined in First start and automatic calibration.

Once the home position is determined, the various positions on your layout are defined as the number of steps from this home position.

That’s pretty much as simple as it gets. These step positions are defined in myAutomation.h (part of EX-RAIL), which will be described in further detail below, including how to ensure these are advertised to WiThrottle applications.

It’s recommended that the home position does not align with a specific layout connection track to ensure that each time EX‑Turntable powers on, it automatically triggers the homing activity to occur, ensuring it starts in a consistent location each time for the highest accuracy.

To control the turntable, the simplest method is using EX-RAIL automation commands advertised as ROUTEs to the throttle of your choice.

Refer to the Testing, Tuning, and Control page for more details on this.

An important aspect that must be taken into consideration with a rotating turntable is the phase or polarity of the turntable bridge track in relation to the surrounding layout tracks.

If your locomotive drives on to the turntable bridge track, and the DCC phase (or polarity) is not aligned with the surrounding layout tracks, then you will cause a short circuit. The CommandStation should cut power in that scenario, but the desired behaviour is simply to drive onto the turntable with no interruption.

In order to prevent short circuits, the phase (or polarity) of the bridge track will need to be inverted when rotating to ensure it remains in alignment with the surrounding tracks. There are three options to achieve this:

The critical aspect when using EX‑Turntable/EX-RAIL or a mechanical method to control the phase is to ensure the entry and exit tracks for each position are wired with the same phase or polarity. An auto reverser will allow out of phase layouts to work as it will always reverse on a short circuit.

Consider the turntable starting in alignment with the entry and exit tracks, with everything wired in alignment so the +/- connections from the motor shield are connected to the same rail all the way along.

If we do not invert or reverse the phase, when it rotates 180 degrees, there will be an obvious issue! 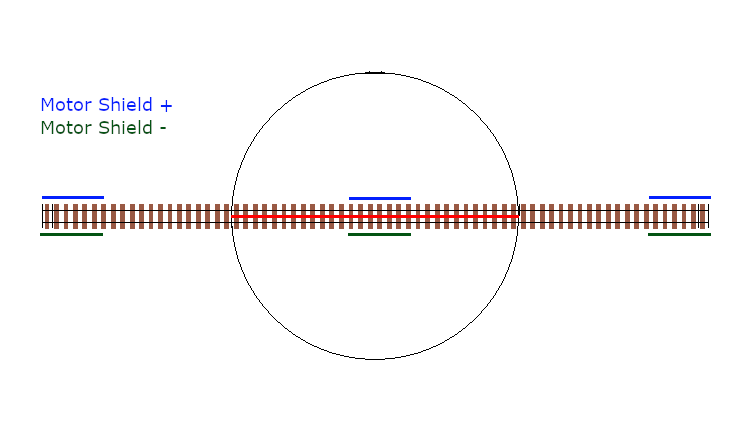 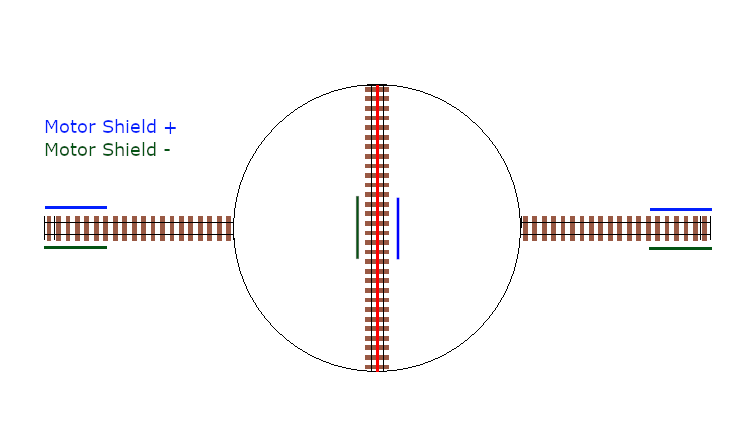 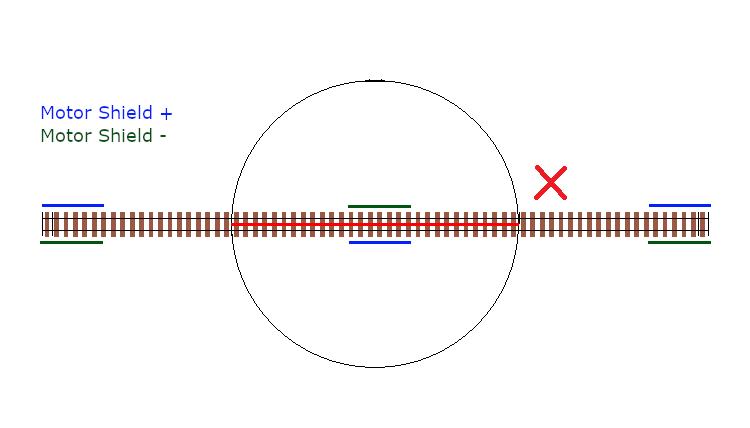 Now consider inverting or reversing the phase when performing that 180 degree turn, and the result is just like the starting point, with all tracks in DCC phase alignment. 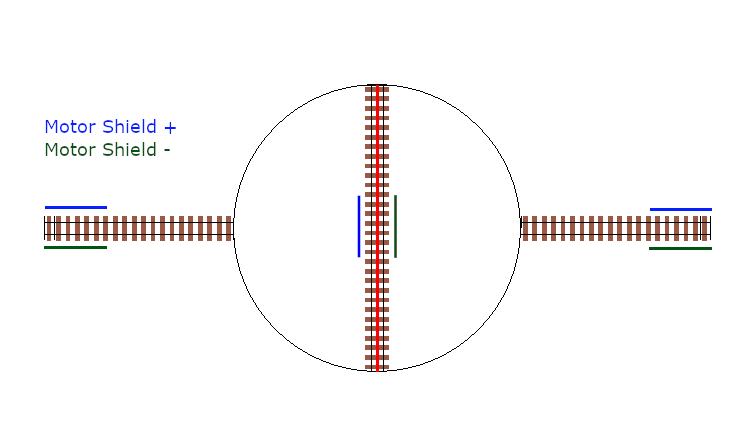 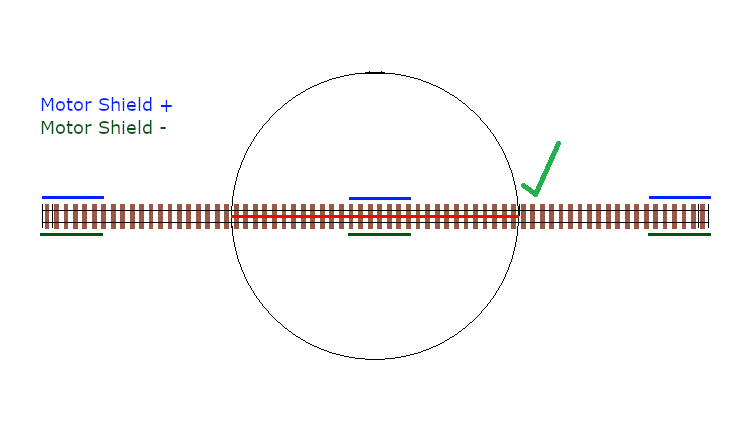 How does this work with EX-Turntable?

EX‑Turntable supports automatic phase switching by default, but can also be controlled manually by both EX-RAIL and diagnostic commands.

In the diagrams below, the “home” end of the turntable bridge is indicated by the bright green sleeper, with the “home” position of 0 degrees being located at the top of the diagram. The surrounding layout tracks are separated by 10 degrees.

The yellow dashed line represents the 45/225 degree trigger points to invert and revert the phase switching, with the light yellow shaded area representing the 180 degrees in which the phase will be inverted.

The surrounding layout tracks have been wired so that each opposing track is wired the same.

To start, the turntable bridge is aligned with the first layout track, which is 10 degrees from the home position, and all our phases are in alignment. 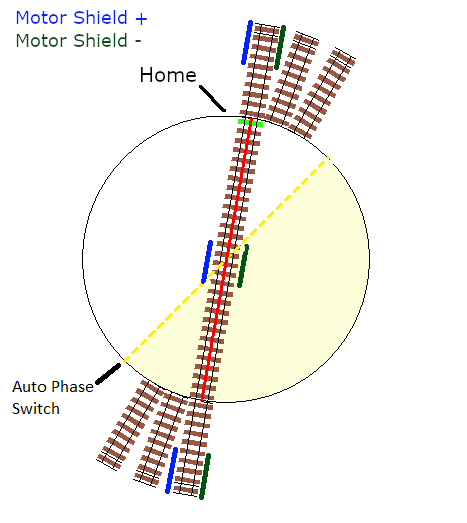 Next, we’ve sent a command for the turntable to rotate 180 degrees, which requires our phase to be inverted in order to prevent a short circuit.

As this will trigger the turntable to rotate beyond our 45 degree trigger point, the phase will automatically be inverted. 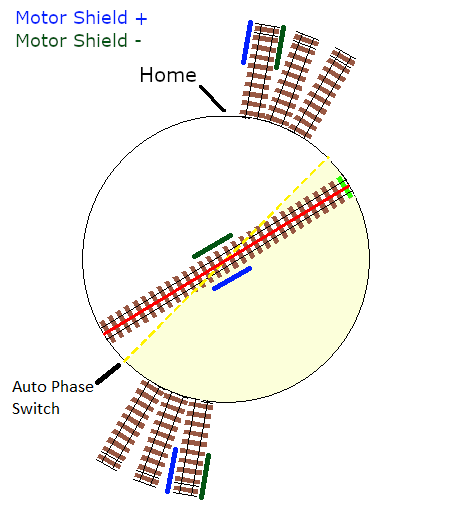 Once the turntable reaches the correct position, all our phases will be in alignment, meaning our locomotive can leave or enter the turntable with no short circuit issues. 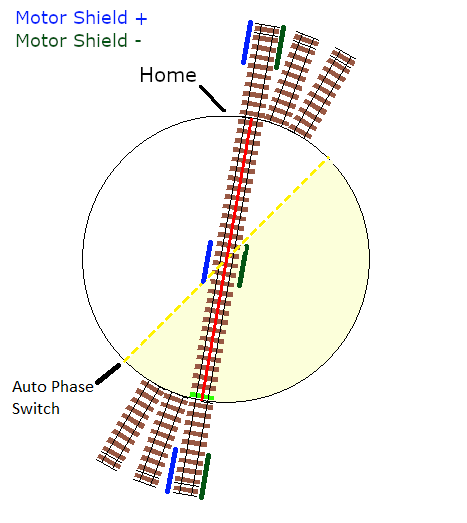 If the turntable continues to rotate beyond the 225 degree point, the phase will revert again. 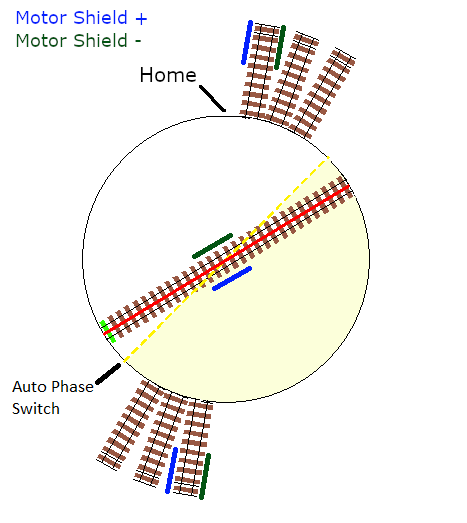 The above outlines how the default automatic phase switching works with EX‑Turntable, and this behaviour is configurable.

If you find that the default 45/225 degree angles aren’t right for your layout, then this can be modified in “config.h” which is created in Install the Software, and the configuration parameter is outlined here: PHASE_SWITCH_ANGLE.

Now that you have a general overview of EX-Turntable’s features and capabilities, click the “next” button see what is needed to create an EX‑Turntable.