Firstly, an apology. The document below is mostly based on my activity log while developing the HAL software and other associated modules (I2C etc.). Consequently, it is badly structured, random, and mostly extremely technical. For that, I apologise.

Now, on to the content. You have been warned…

The HAL provides the ability for any output device that can be controlled by a binary command (on/off, position1/position2, set/reset etc.), or any input that provides a binary signal (on/off, active/inactive, above/below threshold, etc.), to be controlled from EX‑CommandStation code through a standardised application programming interface (API) defined in class IODevice, irrespective of the type of hardware, the electrical connection or the control protocol that is used.

The external device may be connected directly to an Arduino pin, a pin on an I2C-connected extender module, a DCC Accessory controller, or another microcontroller connected via a serial or wireless connection. The HAL allows any of these options to be used without any changes to the Command Station software, just a couple of lines of text added to the user’s configuration file before building the software. One line is a #include directive to include the device definition, and the second line associates the device type, and its handler software, with an I/O pin number or range of numbers. However, rather than being a specific Arduino I/O pin, this pin number is termed as a ‘virtual pin’ or vpin and is a reference to any kind of ‘end-point’ connected to a local or remote device.

When Command Station changes a turnout or output, the Command Station code issues calls in the form IODevice::write(vpin,value). The vpin is used to route the call to the correct device handler, and the device handler sends a command to the device being controlled to carry out an action; for example, a digital output is switched to illuminate an LED, or a servo moves the railway track points from one position to another.

The class hierarchy is shown below. 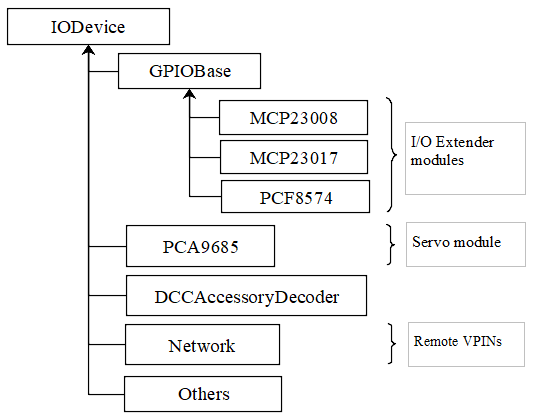 IODevice defines the overall base class interface, which is implemented in each HAL device driver class. The class GPIOBase implements functionality that is common to, and inherited by, the drivers for GPIO input/output modules (MCP23017, MCP23008 and PCF8574). Consequently, the drivers for those modules are relatively simple and just include the device-specific commands for reading and writing to the module’s registers.

Define turnout output on specified vpin. This may be used for controlling Arduino digital output pins or pins on an I/O Extender.

Define turnout on a DCC Accessory Decoder with the specified address and subaddress.

Define turnout on a DCC Accessory Decoder with the specified linear address.

Legacy command format for defining a turnout on a DCC Accessory Decoder with the specified address and subaddress.

Legacy command format for defining a turnout servo on specified vpin. The positions are the same as for the turnout servo command above. Note: Servos are not supported on the minimal HAL (Uno or Nano target).

The interface functions to the HAL are as follows. Apart from the ‘create’ functions, these functions are generally only called internally from within the EX‑CommandStation software. The xxxx::create() functions however are required to be added to the user’s myHal.cpp or mySetup.h configuration file in order to register the device driver and configure the specified VPINs.

Create an instance of a HAL I/O driver for an MCP23017 GPIO Extender with 16 inputs/outputs (numbered from firstVpin to firstVpin+15), on I2C address 0x20. The device input pins will be polled at a target rate of once every 4 milliseconds. The first syntax calls a function, so should be placed in executable code context (in a function). The second syntax is a declaration and should NOT be in a function.

As above, but using the MCP23017’s interrupt pins (INTA/INTB) connected to Arduino GPIO pin 40 via a jumper wire. The device will only be polled when the MCP23017 pulls INTA or INTB (and hence pin 40) to ground to signify that a change has occurred. A single Arduino pin may be shared by multiple modules by commoning together the INT* pins from each module.

Create an instance of a HAL I/O driver for an PCF8574 GPIO Extender with 8 inputs/outputs, on I2C address 0x23. [An interrupt pin may be specified as for MCP23017.]

Create an instance of a HAL I/O driver for an MCP23008 GPIO Extender with 8 inputs/outputs (numbered from firstVpin to firstVpin+7), on I2C address 0x21. [An interrupt pin may be specified as for MCP23017.]

Create an instance of a PCA9685 servo interface module driver with 16 outputs (numbered from firstVpin to firstVpin+15), on I2C address 0x40.

Create a range of four DCC Accessory Decoder pins from firstVpin to firstVpin+3, starting at the specified decoder address/subaddress. The addresses are treated as a linear address space, so multiple decoders on contiguous addresses may be configured by one statement.

The remainder of the functions below are intended for use within the DCC-EX software only, and are not usually required by users.

Set/reset the state of a digital pin (local Arduino, remote GPIO extender, servo, DCC Accessory Decoder, or other output device). The vpin will be implicitly switched into output mode by this call. If the device in question does not support the write operation, the call will be ignored.

Write value to a pin capable of analogue operations (e.g. a servo attached to a PCA9685 module). This function does not require the pin to have been previously configured by the IODevice::configure() function.

[For the PCA9685, value is the position, between 0 and 4095 and represents the PWM ratio, with 0 being fully off and 4095 being fully on; param2 is profile, which defines how the servo moves, and may be 0 (Instant), 1 (Fast), 2 (Medium), 3 (Slow) or 4 (Bounce). If param2 is zero, then param3 is the time that the animation is to take in 20ths of a second (default 0). If the top bit of param2 is set (e.g. param2=0x80 + 1) then the PWM output will be maintained after the desired position is reached. This is useful if the device is controlling an LED, since otherwise the LED will be turned off at the end.]

[For the DFPlayer MP3 player device, value is the number of the sound file to be played; and param2 is the volume.] If the device in question does not support the writeAnalogue operation, the call will be ignored.

Read the current state of an input pin (local Arduino or remote GPIO extender, or other input device). The vpin will be implicitly switched into input mode by this call. For digital inputs, the return value is true (1) for 0V (active) and false (0) for +5V (inactive), accounting for the pull-up. If the device in question does not support the read operation, the value returned will be zero.

Read the current value of an analogue input pin (local Arduino or remote ADS111x ADC module, or other input device). The vpin will be implicitly switched into input mode by this call. If the device in question does not support the readAnalogue operation, the value returned will be zero.

Configure a digital input pin for pull-up or no pull-up (default is that pull-ups are enabled). If the device in question does not support the configureInput operation, the value returned will be false.

Configure a PWM (servo) output (required). Profile may be 0 (immediate), 1 (fast), 2 (medium), 3 (slow) or 4 (bounce). [activePosition and inactivePosition are between 0 and 4095 and represent the PWM ratio, with 0 being fully off and 4095 being fully on. Thus, the PWM signal may be used to drive servos, LEDs or other devices.] If the device in question does not support the configureServo operation, the value returned will be false.

Invoke the regular operations of the HAL, e.g. updating servo positions, regular polling of inputs, etc. [This is called from the loop() function in CommandStation-EX.ino.]

The following #define symbols may be defined in the IODevice.h file or the platformio.ini file in order to facilitate fault-finding or to remove the HAL from the build.

Enable calculation and display of average and maximum loop times for the CS’s overall main ‘loop’ function. When enabled, the diagnostic is updated every 5 seconds and is sent to the diagnostic output (USB Serial) and to the LCD line 1 (overwriting the ‘Ready’ message).

Removes the bulk of the HAL code. The only parts that remain are those that are required to interface to the Arduino’s input and output pins. This symbol is automatically defined if the code is being compiled for an Arduino Uno or Arduino Nano target, to reduce the memory footprint. In this mode, inputs pull-ups are enabled and inputs are inverted (i.e. 5V=inactive and 0V=active).

When a transition between states has completed on a PCA9685 (e.g. a servo movement), the servo motor will be switched off, by disabling the pulses on the pin. This reduces power consumption and potential noise (servo buzz) when the servo isn’t moving.

The following symbols may be defined in I2CManager.h or the platformio.ini file to adjust the behaviour of the I2C subsystem.

Configure the I2C Manager’s non-blocking AVR and 4809 drivers to use interrupts to signal completion of an I2C operation (default unless I2C_NO_INTERRUPTS is defined).

Don’t use interrupts to signal completion of an I2C operation. The I2C state is instead checked whenever the following functions are called:

This option will reduce the amount of time spent in interrupt code, but not completely eliminate it (since interrupts are also used by the serial USB, clock and other components). It will also slow down the I2C throughput as there will be increased latency between consecutive bytes sent and received.

There are various ways of configuring I/O and creating turnouts, sensors and other objects when the Command Station is powered on:

After using the commands (<S …>, <T …>, <Z …> etc.) to define sensors, turnouts and outputs, use the <E> command to save them to EEPROM. Then, when the Command Station restarts, the definitions are read back from EEPROM and the objects recreated. This is limited to turnout, sensor and output definitions.

Create a ‘mySetup.h’ file, and add commands in the form SETUP("....");. This can be used for any command that is accepted by the EX‑CommandStation parser, including turnout, sensor and output definition commands. The mySetup.h file is included as executable code into other modules of the Command Station. Consequently, the content is limited to executable statements (or macros that expand into executable statements). Global variables or functions cannot be defined, and only very simple include files can be added. Consequently, only a limited number of the DCC-EX API function can be used from here.

Create a ‘myHal.cpp’ file and add a function definition void halSetup(){ };. Within this function you can add any executable code. Outside the function, you can declare variables and add include files to allow other functions to be invoked. For example:

Because the myHal.cpp module is a self-contained C++ module, autocomplete and visual syntax checking will be fully functional in editors that support it (e.g. PlatformIO).

The following functional changes have been done in the neil-hal branch to support the implementation of the HAL in EX‑CommandStation, and to improve the handling of Displays, Turnouts, Sensors and Outputs.