Before proceeding with testing or any configuration, it’s important to understand the two commands available for controlling EX‑Turntable.

Here’s a quick example to demonstrate the difference between the diagnostic and EX-RAIL commands, with both commands below rotating to step position 100:

As of version 0.5.0-Beta, the ability to test EX‑Turntable directly via the serial console has been introduced.

Similar to the EX‑CommandStation diagnostic command outlined previously, the syntax is <steps activity>, where again steps is the number of steps from the home position to move to, and activity is as per the previous table. Note that also like the diagnostic command, this needs to be a number.

For example, sending the command <300 0> via the serial console will result in output similar to this:

Firstly, power on EX‑Turntable, followed by your CommandStation. By powering these on in that order, you will ensure that EX‑Turntable is available prior to the CommandStation trying to load the device driver, otherwise it will consider the device as “OFFLINE”, and commands will fail.

Referring again to Adding a New Device, skip ahead to Checking the Driver, and the output you’re looking for to validate the EX‑Turntable device driver is loaded and connected successfully is below:

If there is an “OFFLINE” at the end of the EX‑Turntable line, it indicates something is not quite right. Refer to EX-Turntable showing as offline with <D HAL SHOW>.

For all testing and tuning below, it is assumed that the default option for automatic phase switching is enabled, and that the default ULN2003/28BYJ-48 stepper driver and motor combination is in use in half step mode, which is ~4096 steps per revolution.

This command should rotate the turntable a further 500 steps and active the phase inversion relays:

This next command should rotate the turntable in the reverse direction by 300 steps and deactivate the phase inversion relays:

This command should rotate the turntable again in the reverse direction, and should also activate the phase inversion relays:

Providing these tests have completed successfully, you are now ready to tune the turntable positions for your layout in preparation for defining the EX-RAIL configuration and putting EX‑Turntable to good use.

To determine your starting positions, you will need the full turn step count as recorded in First start and automatic calibration.

To tune your turntable positions, you will need to calculate the number of steps from the home position the turntable needs to rotate in order to reach the desired position. By default, the turntable will turn in a clockwise direction (as demonstrated by the homing activity).

At this point, you should either have a layout you’re fitting EX‑Turntable into, or a layout design that you’re working to, with the various turntable connection tracks defined. 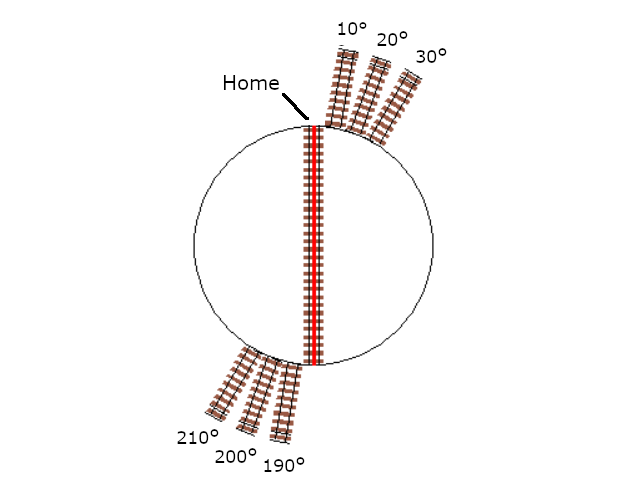 Apply to your layout

At this point, you should be able to apply the above calculations to your own layout and come up with the step count required for each position.

Now that you have defined all of your turntable positions with appropriate phase/polarity switching, it’s time to get these advertised to Engine Driver and wiThrottle applications.

The method to advertise these is to use EX-RAIL’s ROUTE function with the MOVETT command, which will ensure all of your defined turntable positions appear in the Engine Driver and wiThrottle Routes sections.

If this is your first experience with EX-RAIL and the “myAutomation.h” file, familiarise yourself with EX-RAIL by reading through EX-RAIL (Automation).

That’s it! Once you have created “myAutomation.h” and uploaded it to your CommandStation as per the process on the EX-RAIL (Automation) page, the routes for each turntable position should automatically be visible in Engine Driver and wiThrottle applications.

My turntable moves on startup!

So far, all the examples, testing, and tuning have relied on automatic phase switching.

There may be times where manual phase switching is required, whether due to awkward track wiring, layouts that have tracks at angles that make it hard to determine the correct angles at which to automatically switch the phase, or (in an upcoming release) when traversers are used rather than traditional turntables, that don’t actually required phase switching at all.

To enable manual phase switching, you must edit “config.h” and set PHASE_SWITCHING to “MANUAL”.

Once this has been done, you must explicitly define the phase switching to occur as a part of the diagnostic or EX-RAIL command for every step position that requires an inverted phase.

The phase switch command (1 for the diagnostic command, Turn_PInvert for EX-RAIL) does not continue to invert the phase each time that command is sent, the command simply tells EX‑Turntable whether or not to activate the phase inversion relays.

To use our example from above, the commands in Example tuning commands would need to be modified to replicate the automatic phase switching as such:

The EX-RAIL equivalent to the above would be:

If you do not explicitly send the activity command to invert the phase, and the turntable orientation results with the phase out of alignment with the surrounding tracks, this will result in a short circuit when a locomotive attempts to enter or exit the turntable bridge track.